New season...new goal...new fish.  For some reason being busy has limited my posts.  I'm focusing on fishing the fly more this year and hopefully can keep the blog busy.  Until the fly is in the water here is a bright coastal king to keep the juices flowing.

There's nothing like hooking one of these bad boys in water that's deep enough with enough current for them to really work.  I had no where to land it at until a nice boater let me board and assisted with the landing.  It will feed the family so the next fish can swim free to do their thing.

I have a bamboo rod that saw some action this summer and I believe it needs to feel the bend of a fish again so over the mountains for one last trout hunt I may go.  However, the call of the coast is very strong with the good fishing and its hard to ignore.
Posted by profess at 8:05 PM No comments:

First on the tag

Made it out with Ed Fast of Ed Fast River Adventures Saturday.  We floated the Sandy River.  Ahhhh, the Sandy, she be a mean wench sometimes.  But not Saturday, we were rewarded with the most beautiful of fish, the steelhead.
This was the second fish to hand, a chrome wild.  Small but gorgeous.

Before that I was able to ink the tag for 2012 and secure a fish for the family to enjoy.  One of the reasons I fish and hunt is to enjoy the fruits of this great land.

Finally, I was able to connect last week with my first steelhead on a swung fly.  Fishing my okuma reel on a Cabela's 13'8" two hander brought a huge 38" clackamas wild fish to hand.  My very personal best steelhead to date and so very worth the many hours spent learning the spey.  The only pic is in my memory, to be replayed at will.

Enjoy the winter.
Posted by profess at 8:41 PM No comments:

Since its almost September I can finally start getting excited about coho.  I'm going to focus on them with the swung fly and jigs this year.  Perhaps they will be as willing biters as the chinook have been as of late. 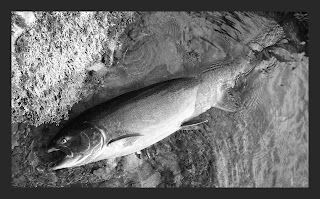 These guys are fun, they pull like a train, but the acrobatics of silvers and steelhead are the stuff dreams are made of.  That's what fall brings, dreams of rain, of rivers rising, and of fresh pushes of chrome bright fish.

Posted by profess at 5:59 PM No comments: 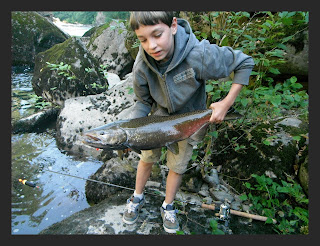 My oldest son and I hit up the river today and were able to get him his first ever salmon.  This makes a second first for him.  First steel this winter and now this guy. 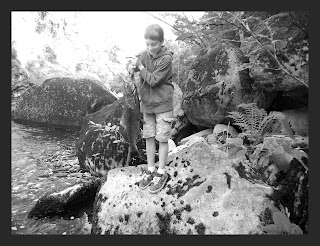 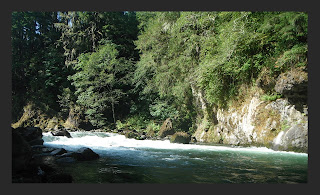 The fish came out of the white water, just behind a rock thats buried mid river, near the far bank.  Total surprise, float hit the water and zip, down it went.  Missed the first hookset and got the follow up.
Posted by profess at 4:29 PM 1 comment:

I finally got into a little hot streak.  Fishing that is, the weather cooled down to the mid 70's and I happened on a strech of river with willing fish in it.  I just love this stretch.  Its a bit of a hike in and out, but there usually isn't more than a handful of people in there, and its really very easy to find solitude.  So you get big fish, multiple species and no crowds.  Everyone is boat to boat at Bouy 10 and I'm enjoying time away.
The fish are coloring up, but I need smoker meat as I'm running out of my last smoked salmon.  That and some fresh eggs to replenish the bait supply keep me retaining a few of the better fish.  First one I got was 11' down in some very fast water.  The float slipped below the surface, barely, and I reeled down.  My reward were some fierce headshakes followed by the pull of a big fish.  After a wild fight, as she kept trying to cut off on the rocks I guided this one in. 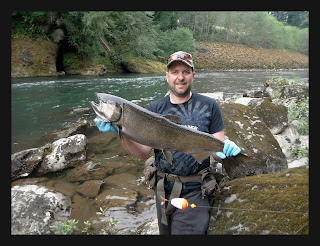 This was the only one landed by me on this trip.  I missed some very hot steelhead, actually was surprised by them and once bit twice shy so to say.
The next day I ventured out again and found this big boy holed up near a rock.  Got him in quick and back out so as to bother him as little as possible. 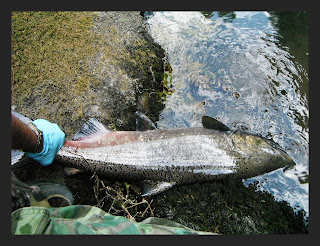 Then this cute girl showed up for the fight.  She really didn't want to come home but I pursuaded her to visit for dinner.  Fired up the smoker and as of now she is on her way to my brothers house as he doesn't get to fish for these brutes much. 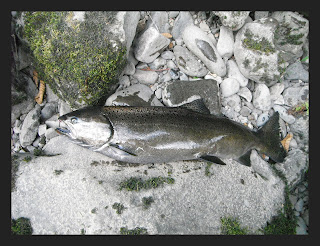 Posted by profess at 8:41 PM No comments:

Yep, today was a scorcher.  After working yesterday in the sun, I was done.  I opted out on a trip to the Sandy river, and went up the gorge looking for cooler temps.  I had a small stream in mind and had seen some fish earlier in the week when I was passing by for work.  This is a perfect place in August.  Super shady, no people and not to far from home.  Left at 7:30 home by 11:30 missed most of the heat!  I was able to find two fish and got this king after a short hike. 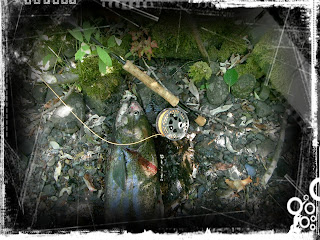 It wasn't in the best shape, but it was missing a fin and my smoker is empty so home it came.  There are bodies of water with more and fresher fish, but not with less people.  I can handle less fish if it means solitude.  Especially after a long hot week.

I also took my youngest (6) out flyfishing for trout on the Clackamas this week.  He picked up fly casting amazingly fast.  We found almost too many beautiful small trout.  They are fiesty and keep him occupied so we go with it. 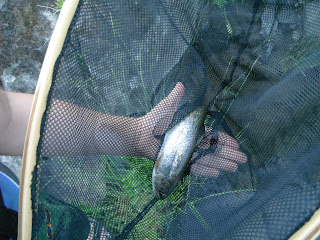 Soon, say september, I'll head over and try my hand on the Descutes for those fun summer steel.  Until then, fish hard.
Posted by profess at 8:03 PM No comments:

Lucky for me I got one last trip in before all the rivers went over the banks.  I went to bed dreaming of steel and pushed my son outa bed early so we could be on the road before any traffic. 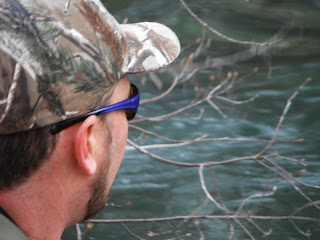 When we got to the river found it was just the right height.  Color was outstanding although a little on the clear side. 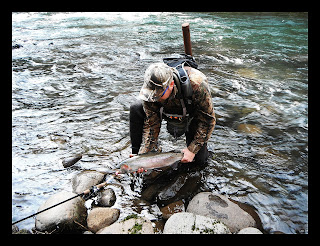 Found this one holding in some whitewater at the head of a fast pool.   He hit the reliable wilsonator on the first cast.  A quick tug tug and I set the hook hard, then remembered I had light leader on and went for the full ride with it.

Found a few more, and a whole pod with lock jaw before my son and I hit up the jerky store for 40' of the coasts finest.  Mmmmmm.  Didn't even have to clean it.  Now I'm tying up some leaders for plunking some of the Big C chrome, if I can make it out before the closure that is.
Posted by profess at 5:36 PM No comments: